I am writing to you in your capacity as Chair of the ICANN Board Governance Committee, which under Article IV, Section 2.3 of the ICANN Bylaws is tasked with reviewing and considering Reconsideration Requests. As you are aware, Reconsideration Requests are one of the pillars of Accountability and Review that ICANN has enshrined in its bylaws. This Reconsideration Request is filed in response to repeated and continued failure of ICANN to timely publish preliminary minutes of its Special Meeting in accordance with Article III, Section 5.2 of the ICANN Bylaws. As ICANN embarks upon the initial Accountability and Transparency review as provided for by the Affirmation of Commitments, it is critical that the Board Governance Committee finally address these repeated bylaw failures.

[it] agrees that ICANN should have an improved procedure for informing the community about actions taken during its telephone meetings, while nevertheless allowing all 19 members of the Board sufficient time to review and edit the draft minutes of the Secretary to ensure accuracy before they are publicly posted.

On 6 June 2000 the ICANN Board unanimously approved the recommendations of the ICANN Board Reconsideration Committee, and directed staff to propose bylaws amendments in accordance with the Committee’s recommendation. On 16 July 2000, the ICANN bylaws were amended by the Board to incorporate the following provision to increase the openness and transparency with regard to ICANN operations, “[n]o later than five (5) days after each meeting, any actions taken by the Board shall be made publicly available in a preliminary report.”2

On 15 September 2003, Bret Fausett filed Reconsideration Request 04-1 in connection with ICANN’s failure to timely post the preliminary minutes in connection with the ICANN Special Board meeting held on 9 September 2003. Under the ICANN Bylaws amended in accordance with Bret Fausett’s previous Reconsideration Request, ICANN was required to post the preliminary minutes within “five (5) days after each meeting.”

On 13 October 2003, the ICANN Board unanimously approved amending the bylaws to calculate the five (5) days in terms of business days, not calendar days.5

there were extenuating circumstances in this case, and that any practical effect of the delay was addressed by the extension of an affected public comment period.7

Notwithstanding these “extenuating circumstances” the ICANN Reconsideration Committee made the following recommendations to the full Board:

In response to this recommendation of the ICANN Reconsideration Committee, the ICANN Board passed the following resolution:

Whereas, in its report at the Public Forum on 14 July 2005, the Reconsideration Committee presented a recommendation based on Reconsideration Request 05-1, urging the ICANN Board to consider using real-time scribes to record all Board Meetings (including those Special Meetings held by teleconference).

Whereas, the ICANN Board has considered the Reconsideration Committee's recommendation, and has determined that it would be beneficial for the public to be able to review transcriptions of all voting and Board member statements in connection with votes, consistent with procedures to protect confidential or privileged information.

Elements of Reconsideration Request 10-1 Required Under the Bylaw

Failure to post the Preliminary Minutes of the 4 February 2010 (3:00-6:00 UTC) Special Board Meeting in accordance with the timeline set forth in the bylaws, as well as other timeline representations made in public by the ICANN Chairman, Peter Dengate Thrush.

Deprived access to information about actions taken by the Board ICANN. No "special harm" must be established when ICANN violates the "openness and transparency" aspects of the bylaws as has been established by the precedent in previous Reconsideration Requests in connection with ICANN Bylaw violations.

ICANN's failure to meet the transparency provisions of the bylaws affects all users of the Internet.

No stay is requested.

Article III, Section 5.2 of the ICANN Bylaws provides a firm, "brightline" rule for publication of Preliminary Reports of all Board meetings. It provides: “[n]o later than five (5) business days after each meeting (as calculated by local time at the location of ICANN's principal office).”

The ICANN Board meeting held on 4 February 2010 was concluded at 6:00 UTC. However, for purposes of the openness and transparency requirements set forth in the bylaws, the relevant triggering event was the end of the meeting “as calculated by local time at the location of ICANN’s principal office,” which in this case was Wednesday, 3 February 2010 (20:00 PST).

As of 0:00 PST on Thursday 11 July 2010, ICANN had failed to timely post the preliminary minutes of the 4 February 2010 Board meeting as required by the ICANN bylaws.

In addition to violating this bylaw provision, ICANN’s delay in posting the preliminary minutes are also in contradiction to public representations made by ICANN’s current Chairman of the Board, Peter Dengate Thrush. On Monday 11 February 2008 at ICANN’s 31 st regional meeting held in New Delhi, India, Peter Dengate Thrush in his capacity as ICANN Chairman made the following statement in a public forum,:

Most significantly, something that's met with considerable community approval is the much greater turnaround time for the board reporting. We now get a summary of the discussion, who said what, out within 72 hours of a board meeting. (emphasis added)8

Through repeated violations of this provision of the ICANN bylaws, ICANN has demonstrated that it is either incapable or unwilling to meet the openness and transparency obligations of the bylaws as applied to posting Board minutes and preliminary reports. Notwithstanding public representations by the ICANN Chairman and specific provisions in both the ICANN bylaws and the Affirmation of Commitments regarding ICANN “[e]nsuring accountability, transparency and the interests of global Internet users,” ICANN continues to drop the ball.

Given the fact that ICANN has repeatedly violated this provision of its bylaws, the ICANN Board should follow the previous Reconsideration Committee’s recommendations and provide audio recordings and transcripts in connection with all ICANN Board meetings. This specific request is asking no more or no less than that what the ICANN Board currently provides in connection with its in person meetings held at ICANN regional meetings.

Given the standard operating practices of ICANN’s Generic Supporting Organization and its various Working Groups, these audio recordings (MP3) and transcripts could be made available within hours following the conclusion of a meeting. Recognizing that some content may need to be withheld in according with existing ICANN Board practices, ICANN should be permitted three business days to redact any information deemed sensitive. However, any resolutions passed by the ICANN Board should immediately be posted on the ICANN website unless in accordance with Article III, Section 5.2 the “Board determines, by a three-quarters (3/4) vote of Directors present at the meeting and voting, [the resolution is] not appropriate for public distribution.”

In addition, it is specifically requested that the staff briefing papers that are provided to the ICANN Board in advance of their Board meeting be publicly posted on the ICANN website in connection with the proposed Agenda seven (7) days before a meeting of the Board. Where appropriate, ICANN may redact elements of a staff briefing paper which contains attorney client privileged material, or other sensitive information as in the case of hostile ccTLD redelegation requests.

The reason for this additional request is in part based upon the obligations set forth in the Affirmation of Commitments where ICANN commits to “receiv[ing] public input (including adequate explanation of decisions taken and the rationale thereof).” While ICANN deserves credit for creating public forums to receive public comment, ICANN has fallen woefully short of timely processing these comments. To illustrate this point one needs to look no further than the ICANN Public Comment Page.9 On this page there are fifteen (15) public forums “Awaiting Summary/Analysis” eleven of which the Public Forums closed prior to 11 December 2009.

There are three grounds:

Having had the privilege and honor of serving on the ICANN Board I would like to proactively address some of the opposition to this Request for Reconsideration that both the ICANN staff and Board will raise.

Hours within the filing of this Request for Reconsideration, the preliminary minutes of the ICANN 4 February 2010 meeting will appear on the ICANN website. ICANN staff will likely offer a litany of “extenuating circumstances” (miscalculated the date, webmaster did not post, busy preparing material for the Kenya meeting, etc.) in connection with this most recent bylaw violation. This would be totally consistent with the explanations offered in connection with the previous Reconsideration Requests. While these “extenuating circumstances” carried some weight when ICANN operated with a staff numbering in the single digits, and a total budget not exceeding 4 million dollars, ICANN is now a truly international organization with a staff in excess of 100 and an annual budget in excess of $60 million dollars.

Some ICANN Board members will in good faith argue that audio recording or transcribing the Special Board meetings would have a “chilling effect” and impede their ability to engage in a full and frank discussion of the subject matter, thus directly impacting their ability to make the right decision. While I do not deny this is valid and justifiable concern, let me explain why this argument must also fail upon closer scrutiny.

There appears to be no “chilling effect” in connection with the public Board meetings held at ICANN regional meetings. In fact I have made it a point to stay for these sessions on the last day to see the dialog and interaction among the Board members which is very insightful and important.

A little institutional knowledge from a long time ICANN participant may provide some additional insightful. ICANN public Board meetings were originally not open to the public. Following strong community opposition, ICANN reassessed its position and provided for public attendance during its in person meetings. This initial position by ICANN, however, left a high level of distrust within the fledgling ICANN community. As a result, the ICANN Board’s only option for “quiet time” was Board dinners the night before the in person Board meeting. Unfortunately, these “dinners” tended to run into the wee hours of the morning.

Over time the ICANN community has placed more trust in the ICANN Board to engage in private thoughtful discussions. To illustrate this point, the current Board needs to look no further that the pre-meeting briefing that it gets from ICANN staff the weekend before the start of an ICANN regional meeting, or the Thursday afternoon sessions where the Board deliberates in private the resolutions/motions that it will be considering the following day. Another feature that earlier ICANN Boards did not have the benefit of the bi-annual (multi-day) retreats where the ICANN Board and senior ICANN staff meet to discuss important issues. Finally, and this is important to note, the community is not demanded access to the Board’s private mailing list, in which during my tenure on the ICANN Board over 2,000 emails were annually exchanged among the Board and senior staff. 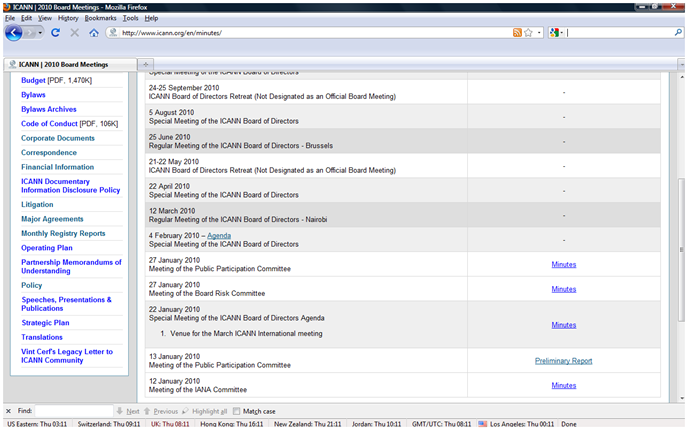